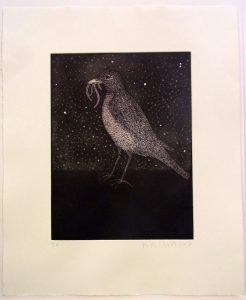 American artist Kiki Smith’s work engages with the political and social, philosophical and spiritual aspects of human nature. Along with sculpture, drawings and prints are her preferred media. Since the early 1990s she has moved beyond investigations of the body to address perception of nature, the environment and the cosmos. Animals have become a central motif in Kiki Smith’s oeuvre: with close links to humans in the role of companions, at the same time habitat loss poses a threat to their survival. Reflecting this, the animal kingdom is always a realm of both life and death in Kiki Smith’s work. Birds are one of the motifs she favours: in the form of sculptures in various materials, or wonderful drawings—partly inspired by studies in the Smithsonian National Museum of Natural History—, in Jacquard tapestries or  installations. Kiki Smith has created a plethora of monuments to dead birds (Destruction of Birds, 1997; Untitled (Jersey Crows), 1995) and countless images of worms, for example against a backdrop of red hand-made paper.

The rather serene image in the edition the artist has made for Haus der Kunst in the context of her Procession exhibition depicts a bird with its prey of worms dangling from its beak. The concise title, Sooner, could have a slightly macabre twist, playfully referencing the expression “sooner or later”, alluding, in the fatalistic sense of something that “will inevitably happen”, to death, and the cycle of nature. At the same time, it conjures up associations with the proverb: “The early bird catches the worm.”

The edition is being produced by Thomas Sebening and Katharina Ulke. Each print in the edition is individually finished, hand-coloured and adorned with silvery palladium leaf by the artist in the elaborate production process for these high-quality prints on handmade paper.  Kiki Smith prepared the drawing for the etching plate in her studio in New York and reworked it for printing in Munich during installation of her exhibition at Haus der Kunst.