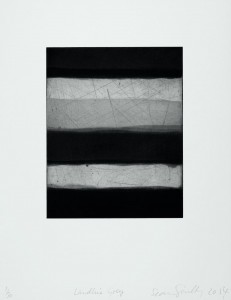 You can pre-order this stunning Sean Scully edition here

Over the course of four decades Sean Scully has developed one of the most significant bodies of work dedicated to geometric abstraction. His canvases, which often have very large formats, almost exclusively consist of different combinations of vertical and horizontal bands or square fields of color. These works have immense sensual power, a “depth of spirit” that artworks inspired by a minimalist vocabulary “seldom entail” (Frankfurter Allgemeine Zeitung). The dynamic painterly gesture of Scully’s canvases carries an emotional impact. Contrasting fields of color each have an inherent sense of movement, and the irregular contours of these shapes, rendered by hand, allow the color below to emerge through the overlay of paint. In reflecting on his work, Scully states that his original intention was to take Minimalism and its repressed sobriety head on, and he describes his images as concentrations of impressions and atmospheres from his memory and as an attempt to convey an expressive power of human dimensions.
During his first major exhibition in 1973 Scully sold all of the works on view. This was the beginning of his path to success that subsequently led to many exhibitions at home and abroad. His works, long considered icons of abstract painting, command top prices.

*Spit Bite
An alternative to bath etching as a way of biting an aquatint. The artist paints a mixture of acid, water, and gum arabic on a plate that is prepared with a rosin ground. The acid bites wherever it touches the plate, showing brushstrokes if the artist so desires. Spit bite aquatint resembles watercolor in the finished print.

*Sugar Lift Aquatint
An aquatint technique that allows an artist to paint a dark form on a white background. The artist draws with a sugar syrup, then an aquatint ground is substituted for the syrup before biting. To accomplish this, asphaltum is painted thinly over the entire plate including the image. After the asphaltum is dry, the plate is put in a bath of warm water until the sugar swells and lifts, leaving the metal exposed in the image area. Rosin is then dusted over the plate, and the plate is etched.