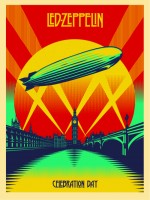 "This year I’ve been ridiculously fortunate to work with some of my favorite bands… the Black Keys, Bad Brains, and the mighty Led Zeppelin! After I did the Mothership package for Zeppelin they were happy enough with the art to ask me to give it another go for the package of their concert album “Celebration Day”. I have loved Zeppelin most of my life, so I figured I could pencil them in. At one point in high school I think Physical Graffiti was in my car tape deck for 3 months straight. Anyway, the band liked what I came up with, so BAM!, I have now done TWO album packages for one of the greatest rock groups of all time… which is surreal beyond explanation. I’m releasing an edition of 300 signed and numbered screen prints of the Celebration Day art. There will be an additional 50 prints signed by the band sold for charity at a later date, so if you are a big Zepp fan keep an eye out for that.

The concert sounds amazing and the DVD of the show looks amazing. Zeppelin’s power has not waned a bit since their prime in the 70′s, and I personally think that “Celebration Day” is better than “The Song Remains The Same” as a live record. Check it out for yourself."
-Shepard

Purchase limit of 1 per person/household.
This Shepard Fairey print will be available December 18, 2012 at a random time between 10 am and 12 noon (PST) at the OBEY store here