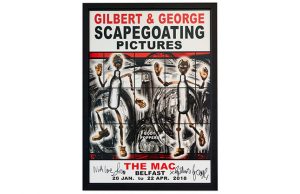 The body of work presented in the exhibition - Gilbert and George’s SCAPEGOATING PICTURES (The MAC Belfast - 26 Jan 2018 - 22 Apr 2018) – draws upon the same geographical source and fundamental themes; unflinchingly describing the volatile, tense, accelerated and mysterious reality of our increasingly technological, multi-faith and multi-cultural world. It is a world in which paranoia, fundamentalism, surveillance, religion, accusation and victimhood become moral shades of the city’s temper. Gilbert & George take their place in these SCAPEGOATING PICTURES as shattered and spirit-like forms – at times masked, at times as grotesquely capering skeletons, at times dead-eyed and impassive.

Dominating the SCAPEGOATING PICTURES, becoming almost the imagistic signature of this new group of pictures, are images of the sinister bomb shaped canisters used to contain nitrous oxide, also known as ‘whippets’ and ‘hippy crack’ — recreationally inhaled to induce euphoria, hallucinations and uncontrollable laughter. Gathered by the artists on their early morning walks from the side streets and back alleys that surround their home, the presence of these canisters, mimicking that of ‘bombs’ pervades the mood of the SCAPEGOATING PICTURES to infer terrorism, warfare and a stark industrial brutality.

Gilbert & George created a set of 5 posters (LONG SOLD OUT) to accompany the 'SCAPEGOATING PICTURES for London' exhibition at White Cube Bermondsey, from 18 July to 28 September 2014. The 'Bigot' and 'Body Poppers' posters now have been re-issued including the MAC Exhibition details.

These Gilbert & George posters are available at The MAC Belfast