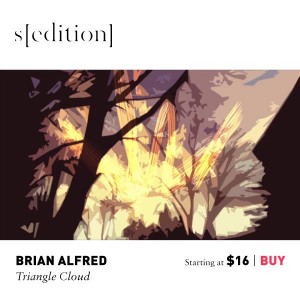 Brian Alfred's Triangle Cloud, 2012, is based on a video the artist took on location of a forest in upstate New York. The movie is calm yet chaotic, depicting the forest scenery from an angle that mostly looks slightly upwards into the trees. The footage is obliterated into a projection of colors that render leaves, branches, shadows and the sky in flat two dimensionality. The style is typical of Alfred's work and reminds in particular of his 333 portrait series.

However, Triangle Cloud uses an animation technique previously not deployed by the artist: the actual video work is made up of over 3000 drawings that are fused into a whole by rotoscoped animation. Rotoscoping is a technique whereby animators trace over footage frame by frame; in Triangle Cloud this method can be identified by innumerable colourful explosions of stars, stripes and what looks like pop brush-strokes or graffiti that flicker over the screen. The interruptions appear either behind or in front of the footage of the forest, sometimes many simultaneously. Alfred: "I added the dynamics and energy that the peaceful scene seemed to hide."

Alfred's Triangle Cloud is hence romantic in subject matter - he depicts the solitude and stillness of a forest - and yet, the work is full of energy, is abstract, creative, and of explosive character. By using an animation technique like rotoscoping in combination with his distinguishable graphic style, Alfred achieves something truly special with Triangle Cloud: the work becomes a combination of the best of what two worlds have to offer: the powerful impact that two-dimensional starkly contrasted graphics have on a viewer, and the energizing enlivening qualities that digital animation can add to any two dimensional reality.