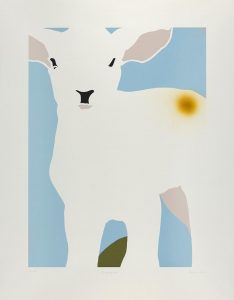 The edition presented here is based on the painting of the same name, which Hume produced as part of Mum, his 2017 solo show at Sprüth Magers, London. Taking the image of the lamb as the central point, the edition is a meditation on innocence and spirituality, placing these qualities in dialogue with the violence of human existence. The coalescence, intersection and interstices of these areas is reinforced further by the title Sunday, connotes the Christian day of rest, as well as the banal ways in which we utilise that day in domestic life, for instance with the Sunday roast.

Produced as a three-colour silkscreen by esteemed print fabricators Jealous, each edition has been hand-finished by Hume, who has spray-painted the marker on the lamb’s rump. Sunday is immediately recognisable as coming from Hume’s stable, through the stylised form of the lamb and the way in which its figure both emerges from and merges with the paper on which it is printed. 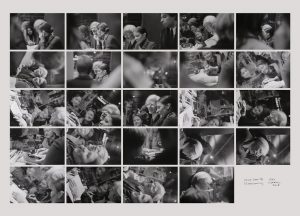 This edition is composed of images that Chaimowicz took in 1975 of the artist Andy Warhol signing copies of his iconic text, The Philosophy of Andy Warhol (From A to B & Back Again). Chaimowicz, then a recently graduated art student, had heard about Warhol’s book signing at Foyles Bookshop, and decided to attend to pay homage to one of his heroes. On arriving at the store, Chaimowicz was met by throngs of like-minded attendees, queuing out of the door and up the Charing Cross Road. In the line, Chaimowicz began critically questioning his actions and, feeling disgruntled at the parasitic nature of fandom, turned on his heel before entering the building and without meeting Warhol face to face. However, as was the norm for the artist, Chaimowicz had been taking photos on his Olympus OM-1 during the wait.

Forty years later, Chaimowicz chanced upon an undeveloped role of Ilford 400 film, the developed results are the images that we see combined here. Produced as a traditional silver bromide print, the enlarged contact sheet envelops the viewer, prompting a visceral response. Physically glossy, as Warhol himself was, the material qualities of the work communicate the essence of the era during which the photos were taken and the circumstances of their capture – through the store window. Recording, almost romantically, the action of Warhol signing his book, alongside the adoration of his fans, the edition communicates the disquieting position of the voyeur, the silent, all-absorbing watcher. Warhol, a famous voyeur himself, is here out-voyuered by Chaimowicz. 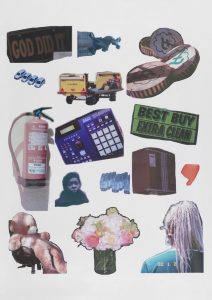 Often utilising the structures that form our post-internet communications in her work, for Grand Calme, Syms co-opted the ‘threat model system’ – a digital diagram of potential threats and vulnerabilities in a software system. Presenting it as a decal across the entirety of the gallery, Syms mutated the system from a rationalised web of diagrammatic controls into one which navigates the neuroses of the artist. Through the arrows and dialogue boxes decaled on the wall of the gallery, Syms’ internal world was generously laid bare to the viewer.

Punctuating this digital diagram – as visual signifiers – were the images presented here. Flashing up as recognisable symbols, the images ground the work in the physicality of the everyday lived experience of the artist, offsetting the digital against analogue elements of human connection. These images were repeated in Syms’ video work Mythiccbeing, which was presented at Bridget Donohue, New York, concurrently to Grand Calme.